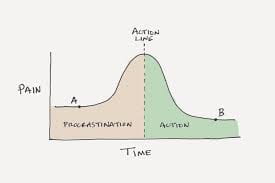 You may wonder what does that long word mean and why do you always hear people saying, “no procrastination!”

Well, let me tell you.

When you look it up in the dictionary, you get this:

“the act or habit of procrastinating, or putting off or delaying, especially something requiring immediate attention.”

For me, Procrastination is the most dangerous word that ever exists. The moment you reach the stage of procrastination an unpleasant feeling comes over you. You begin to feel stressed, your heart begins to ache, your head begins to pound, and everything becomes a mess. It becomes chaos inside and outside. A turbulent wave of fear, anxiety, frustration, guilt, and anger. There is nothing you can do to get rid of the overwhelming feeling except for getting those dreaded and unwanted tasks that you have been putting away for so long done.

Yes, I admit I have encountered the stage of procrastination many times, Procrastination mainly occurs within individuals because we most of the time think of short term happiness rather than long term happiness. We put aside unwanted tasks the minute we hear about them and tell ourselves that we have so much time so lets just do something fun right now and finish the task later. Then the night before or at the very last minute we realise that our work is incomplete and that it must be done very soon. Then that is when we notice we just reached the stage of procrastination. Overwhelming negative feelings come over us, we begin to stress and rush things. Most people when they reach this stage start wasting time again thinking about how they procrastinated while procrastinating even more. For example, they start telling their close friends or family their mistake and how they are so stressed without even knowing that they are wasting even more time doing this.

Procrastination is not a good thing. If us human beings did not procrastinate we would be much more efficient and we would have our work and tasks completed in much better quality.

Now that we know what procrastination means, what it does to us, and why we do it, I figured you would want to know some ways on how to stop it from occurring.

So, here are some tips on how to stop procrastinating:

We can stop procrastinating by thinking ahead and thinking of consequences of it rather than the exciting things you can do while setting it to the side to finish later. We should have the mindset that if we finish now we can enjoy the exciting things later without having to worry about incomplete tasks.